The oak tree, a natural monument 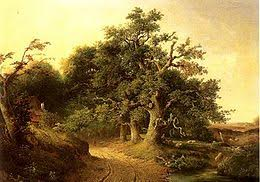 In all areas north of the equator oak trees grow naturally, and in ancient times immense oak woods covered large parts of Europe. The oak is a remarkable tree, a divine tree, famous, revered, and threatened. As irregular, powerful and vulnerable as life itself.

The oak tree symbolizes dignity, wisdom, and the connection between gods and humans. This way, the tree played a decisive role in the lives of prehistoric people. For ancient Persians, Greeks and Romans the oak stood, quite literally, for willpower. The Roman author Tacitus describes the sacreds woods of the Germanic people, where sacred trees were worshipped. At the foot of the mighty oak, justice was administered, offerings were made, and runes cut and used to forsee the future.

Worship did not take place in temples, but under trees in the open air. Specifically chosen oak trees were used to honour Thor (or Donar). The word oak is related to the Indo-Germanic word igja, ‘reverence or respect’, the word druid to the Celtic word for oak (druids were also known as ‘oak-men’). Such worship of nature was, of course, a thorn in the flesh of any missionary. Not surprisingly there are many stories about the cutting down of such ‘Donareiken’ (Thor’s Oaks), also known as Jove’s Oaks. Perhaps the most famous example of this kind of oak-sacrilege was commited by the ‘Apostle of the Germans’, Bonifatius, around 723.

Several ancient people connect oak trees closely with thunder gods. Thor or Donar with the Germanic people, Taranis with the Celts, Zeus with the Greeks and Jupiter with the Romans. There are also claims that lightning is more likely to strike oak trees than any other type of tree. Supposedly because the deep rooted oaks are well earthed, or as a result of the high water content of the oak trees. Or, as the German saying has it: ‘Vor den Eichen soll man weichen, Nur die Buchen soll man suchen’.

Not everybody is convinced however. It may be that due to differences in tree bark, lightning strikes at beeches can be easily overlooked. The smooth bark allows rainwater to run down smoothly along the stem and leads the lightning strike, often without any visible damage into the ground. The oak tree however, has a heavily channeled bark which interrupts the streams of rain. This causes lightning strikes to penetrate more often into the tree itself and can, through the broad vessels and retained water inside the tree, inflict more damage to it.

A jewel for the landscape

Whatever the case may be, the oak is a majestical and imposing tree. With its knotty hard wood and impressive top and foliage, it appears to have more branches and shoots than any other tree. All around the world there are famous specimen of these striking trees, benchmarks in the landscape, where even today people gather to watch and enjoy.

One such an example is ‘Major Oak’ in Sherwood Forest. Local folklore claims the tree to be Robin Hood’s hideout and place to sleep for his Merry Men. The tree is possibly between 800-1000 years old and the branches are nowadays supported to keep them from succumbing to their weight. Other examples of famous oak trees are De Dikke Eik (The Thick Oak) of Liernu in the Walloon province in Belgium, the thickest oak tree in the Low Countries, estimated at 700 years old. The Heilige Eik (Sacred Oak) of Den Hout, near Oosterhout in Brabant, the Netherlands, is another fine example. Planted around 1250 it is now a hollowed tree (indeed, caused by a lightning strike). 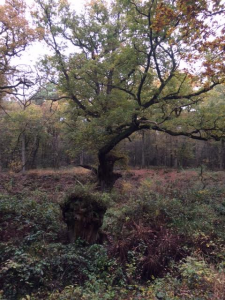 Nature reserve Wolfheze is situated just south of the village of Wolfheze, near Arnhem in Gelderland, and is under trust of Natuurmonumenten, a Dutch organisation comparable with the British National Trust. Apart from being a varied area of outstanding beauty, with broad-leaved forests, open moors, and brooks meandering through the diverse landscapes, it has also special cultural and historical value.

In the footsteps of our prehistoric forebears, we walk the paths that take us along many burial mounds dating back to the Neolithic and Bronze ages, about 2800-1100 BC. Sometimes a mound stands on its own, in other places several mounds are standing in a row.

The medieval ‘church hill’ is all that remains of an old church building and accompanying churchyard that, together will a few farmhouses and a sheep fold, formed the ‘deserted village’ of Old Wolfheze. During the Eighty Years’ War, the Dutch war of independence from Spain, the village was ravaged by plundering Spaniards in 1585. The outlines are still visible as gentle slopes in the landscape.

The track traverses two parallel running earthen banks. These are medieval dikes, probably meant to control the road that ran between them. Even today some of the cart tracks are still visible in the landscape. A more modern kind of dike is the ‘ecoduct’, or wildlife crossing, running over the A50. It connects the Wolfhezerheide that is cut in two by the motorway. The ecoduct not only serves as a safe crossing for animals, it also acts as a footpath.

Wolfheze is situated on the edge of the Veluwe on natural sandy ground. To meet the demand of water and hydropower for water mills, several so-called spring brooks were cut between 1600-1800. These kind of brooks spring at a sunk well and follow the natural altitude down the hills. The Heelsumse beek (Heelsum Brook) is to this day of great importance for nature and landscape, and is attractive to all kinds of plants and animals. And humans too. Nature reserve Wolfheze is a Valhalla for reptiles like lizards, grass snakes and vipers. It is also home to different kinds of woodpeckers, such as the spotted, green and black woodpecker. Ravens brood in the forrests here, obviously, what is Odin / Wodan to do without his Huginn and Muninn?

This time of year the tracks in the forest are surrounded by many splendid and beautifully coloured beech, birch and oak trees. Coming from the heath, the younger trees – in the prime of their lives – form a kind of double row along the paths that leads to a group of monumental oak trees. Not especially large, and not as old as the earlier mentioned famous oak trees, but still about 450 years old. A famous lot, and quite remarkable. Where oak trees normally are associated with Donar, this group is known as the Wodanseiken, Odin’s Oaks. The pretty, fanciful and irregular formed trees nowadays stand amidst a broad-leaved forest, but for centuries they stood in open moorland along the brook. This explains why the oaks are relatively small, with crowns starting low.

The name of this group of oaks, the Wodanseiken, was thought up by the landscape painter Johannes Warnardus Bilders, founder of the ‘Oosterbeekse School’, a group of romantic landscape painters that painted out in the open, ‘en plein air’. To the Oosterbeekse School belonged, amongst others, also Johannes’ son Gerard, Hendrik Willem Mesdag, Willem Maris, Anton Mauve, Willem Roelofs and Jacob Jan Cremer. The varied landscapes of the southern Veluwezoom with its forests, moors, fields and hills of lateral moraine, the many brooks, springs and pools, inspired a great number of artists. 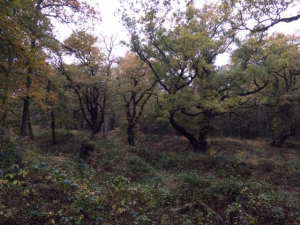 Trouble in the forest

Natuurmonumenten manages and maintains the nature reserve and is advised by the Archeologische Monumentenwacht (Archaeological Monument Watch) and others. This way the monuments such as the burial mounds, dike and church hill are preserved and kept free from overgrowth.

Special care is also taken of the Wodanseiken. This is quite urgent as it appears all’s not going well for oak trees. In an alarming article in Puur Natuur (autumn 2016), the quarterly of Natuurmonumenten, Wilco Meijers writes about environmental damage by ammonia and nitrogen. Both are found in increasing amounts in forest soil, while at the same time minerals become more scarce because of erosion. The cycle of the forest is disrupted and a negative chain reaction started.

This is also bad news for oak trees and the food chain bound to the trees: the oak trees grow less well now their roots are being hindered by the amount of nitrogen in the soil. Soil fungi that assist the oak tree absorbing nutrients suffer as well. The oak leaves contain less nutrients for caterpillars, that die more and more premature. Of course this has its negative effect on all kinds of caterpillar-eating birds, which in return leads to a shortage of nourishment for birds of prey and nutrients for their eggs. Therefore, the amount of ammonia and nitrogen has to come down. Not just for the sake of the oak, but for the environment, nature, plants and animals. And for us humans.

Natuurmonumenten have plotted a couple of really nice walks in Nature reserve Wolfheze. High Wolfheze (Yellow route, 3.5km) and Low Wolfheze (Blue route, 4.5) that can also be combined to a longer trail and have the Wodanseiken at their heart. A third walk (8.5km) starts and finishes at the railway station of Wolfheze. This route combines the highlights of the Yellow and Blue routes and also brings you over the wildlife crossing.

Go for a walk, admire the oak trees and cherish these jewels of the landscape. Combine the walk among the Wodanseiken, ‘en plein air’, with a visit to Museum Veluwezoom, housed in nearby Kasteel Doorwerth. Currently you can enjoy the exhibition ‘Inspired landscape. Life and work of Johannes Warnardus Bilders’. It’s well worth the trip.