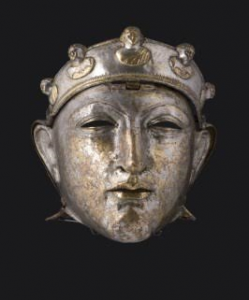 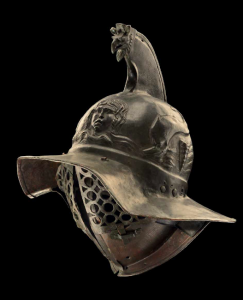 Outside, on the square before the entrance of Museum het Valkhof, visitors are waiting patiently for the gates of the amphitheatre to open and to enter the arena. The start of the big exhibition ‘Gladiatoren, helden van het Colosseum’ (‘Gladiators, heroes of the Colosseum’), coincides nicely with the Maand van de Geschiedenis (Dutch annual Month of History) that is in full swing. This major exhibition almost makes you overlook the small but refined exposition ‘Gezichten van de Limes’ (‘Faces of the Limes’).

That would be a waste especially because gladiators and the Roman army are in many ways intertwined. So, before entering the arena, first take a left once you reach the top of the stairs to the first floor. Here the Roman frontier in the Netherlands is brought to life by a wall to wall projection of the Roman limes as it may have looked in the second century. Google maps the Roman way.

The ‘satellite image’ shows the old course of the rivers Waal and Rhine, completed with the vegetation and known locations of forts and settlements. The visualisation of the limes is based on current scientific knowledge. Sites along the Rhine such as Herwen and Loowaard, are nowadays situated on the opposite riverbank and have been neatly marked on the left side of the riverbank on the new ‘old’ map. This correction of the river’s course to the situation of the Roman period shows the strategic location of castellum Meinerswijk at Arnhem.

The map shows what the limes looked like and how it functioned. It clearly shows that the border could never have been closed hermetically and that its importance was more symbolic. The river Rhine formed a border indeed, but was first and foremost the arterial road and lifeline of the Roman province. More information on the Roman frontier zone in the Netherlands can be found on the Romeinse Limes website (in Dutch).

Beside this new overview of the Roman frontier in the Netherlands, the soldiers themselves get – sometimes quite literally – a face. The collection of near complete helmets and face-masks has been brought together from all parts of the Dutch limes area and covers several centuries of Roman occupation. Some examples have the owner’s names and army units engraved, giving us a glimpse of the origin of both the helmets and their owners. Thus assembled the helmets and visor masks show us the variation in types and decorations.

The map and helmets combined visualize the Roman frontier and the soldiers that were stationed here. The large windows beyond the museum shop (that has been moved to the second floor during the Gladiators exhibition) give a spectacular view of the present landscape of the former Roman frontier zone, and complete the picture.

While you’re here make sure to visit the permanent collection of archaeological finds of the Roman period as well. Have a look at the silver-plated bronze disk of Aquillius, the victory pillar of Tiberius the monumental Gallo-Roman temple at Elst, the different forts in Nijmegen, the (non)military settlements and of course Oppidum Batavorum and Roman town of Ulpia Noviomagus. The many objects rebuild the times of Roman occupation, deepen and enrich the story of the frontier zone, the Batavian countryside and literally dress the inhabitants, soldiers and civilians alike, and bring history home.

In the museum shop the recently published book by Paul van der Heijden, Grens van het Romeinse rijk, de limes in Gelderland (Matrijs, Utrecht 2016) is available in Dutch. This informative and accessible book gives a good general overview of the rich history of Gelderland as part of the Roman frontier.

Before it is time to enter the arena proper and acquaint ourselves with the world of gladiators, let’s enjoy a well-earned cup of coffee (or tea) with a slice of delicious fig and date bread first (don’t forget the coupon from the flyer).